Our girl turns seven today. She’s off for a haircut and isn’t particularly impressed with the agenda. 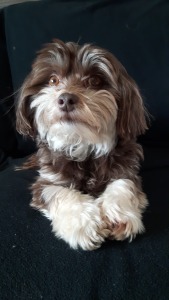 We had a late start in the end as the breakfast we were going to have with Shelley and Sam whose flat we looked after for three weeks in Elwood, phoned to cancel as they have the “roach coach” lergie – in plain English – colds from sitting in putrid recirculated air on an international flight. We still have their keys to return so unless we drop them off before we head northwards on Friday we will return in late March.

We went into Henty House to Amanda to say farewell as she heads back to Frog Hollow to the Aboriginal community for another year. Frasers mum had also made him a birthday cake and he also went to see if he could do any further CPR on his fathers computer. No luck there. 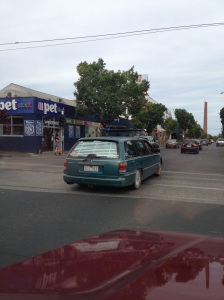 Driving back to Heidelberg we came across this little beauty.
It is about a 1980’s Holden Commodore with Venetian blinds on the back and a sticker that isn’t quite visible that says “Shaggin Wagon”. In the car were three genuine Australian ocker blocks wearing stubbies, no shirts, disgustingly dirty hats and over cooked  leathery skin. One item they were missing was the dice hanging from the mirror. The bum of the car was almost dragging along the road and the engine was indeed rough to listen to. Really wanted to take a photo as we drove passed them but we did a risk ratio analysis and decided it wasn’t a good idea.

Came back to Belinda’s and got all the goodies together in preparation for the big clean tomorrow of her townhouse. We hope we can make an impression on the kitchen, bathrooms and laundry. She is going to repaint the place and relay the hardwood downstairs which will make it look great and ready for more renters.

BBQ on the back verandah followed by yet more birthday cake for Fraser. This is his third cake in two days. So far he has had vanilla, chocolate and red velvet. Watched the men’s final of the tennis and then it was a ripping game of 500 to finish off the evening.