Well today started out as we had ended up yesterday in the excellent company of Lesley and Mike. We made our way to their home at 9.00am and did not leave until 12.30pm. In that time we had tea and cake and spent the whole time nattering. Some of it was certainly about the canals and our experiences and plans for future trips but it also encompassed topics from Brexit (what else), travel (of which they are more prolific at than us), world politics etc. We did have to pull the pin unfortunately as we had four hours cruising to do to keep us on schedule. It was a very fond farewell with a promise to meet up again somewhere and sooner than three years.

Back on the boat no less than 5 minutes when the first mishap occurred. Di wasn’t being very observant and dropped the thingy-ma-gig thing on the bottom of the tiller pointy-thingy into the canal. A very audible “oh f#@$k” was expelled. But, wait!!!! 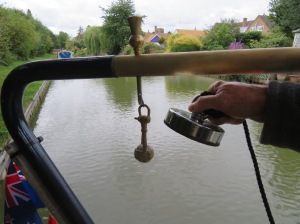 The magnet-thingy to the rescue. After only a short search we made contact with it on the bottom of the canal. Big sigh of relief. Though insignificant in size it is significant in priceless attachment.

Our route today was quite tortuous. We did eight locks and then were on the summit of the Oxford Canal.

Any summit of course on the canals must have the tradition followed, as set by Wolfgang, of celebrating with the skull of some good German schnapps.

The Oxford Canal is a green oasis set amongst the rolling hills of the counties of Oxfordshire, Warwickshire and Northamptonshire. The canal is 78-mile (126 km) long and was completed in 1790.

The canal was constructed in several stages over a period of more than twenty years. The date at the forge in Banbury was dated 1778 so it was built to help build the canal. The stretch of the canal from Banbury to Oxford was built as cheaply as possible. Many economy measures were used. Wherever possible, wooden lift or swing bridges were built instead of expensive brick ones. Deep locks were used wherever possible, with single gates at both ends instead of double gates.

A stretch of the River Cherwell at Shipton-on-Cherwell was incorporated into the canal. This reduced construction costs, but the behaviour of the river makes the canal more difficult to use. This was a false economy and its adverse effects continue to be felt to this day.

We were very fortunate enough to encounter lock volunteers on the eight locks we had to do to which made our passage very quick and smooth.

We are not 100% sure but we think this bridge is what is on the Oxford Canal plaque as seen below. 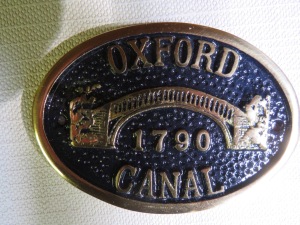 We had very overcast, moody skies which threatened to christian us at any stage with a little precipitation but lucky for us it held off all day. The summit consists of eleven lockless miles and there has always been an issue with water levels and today was certainly no exception. The level looked a foot lower than it should have been. Our progress at times was slow due to the shallowness and fighting very strong head winds. We still made good timing pulling into our mooring spot at 5.00pm. 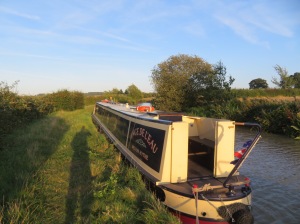 Mike and Lesley had suggested an area on the summit to moor for the night and it was just perfect. After tying up we went for a walk ahead on the towpath and then crossed over the canal towards a small village in the distance. On our trek we came across one of the construction sites for the new High Speed (HS2) rail line. Initially it will link London to Birmingham but eventually go as far north as Glasgow with stops in Manchester, Leeds, Liverpool, Newcastle and Edinburgh. Of course this is a bit of a hot topic as there have been a number of forced land requisitions. As they say, watch this space.