Going forward from today we are retracing our steps back to Reading. Once at Reading, we will hang a left, back onto the Thames and head north to Oxford and the Oxford Canal and NARROW LOCKS!!!! We are not quite sure what we will fill the blog in with as we do not want to repeat ourselves. Might just turn it into a history lessons on the why and how of the canals.

This morning when we left Bristol at 9.30am after obtaining our takeaway coffees, as you do, and the water was like glass. As they say, the calm before the storm. Our aim is to get off the Avon River and back onto the Kennet and Avon canal before the weather turns foul in a big way. 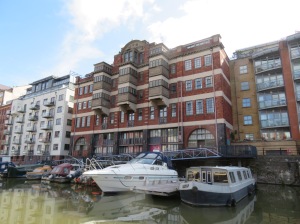 There is some unusual architecture along the river and it is hard for us to put a period on it. This one looks like someone just pulled it out of a lucky dip packet.

Fascinating squirly pedestrian bridge which no doubt was one of those millennium projects. We have come across a plethora of them on our travels.

We found this hire boat moored up and they were all out fishing for dinner, one presumes. Maybe the fish in the river might not be bad but no way would you eat anything from the canals.

You really do see some weird and wonderful sights as you cruise along and this is not the first time we have seen a dressed up mannequin. There seems to be some fixation on mannequins with live aboard boaters and some of them are just damn spooky. What we did see which put a big smile on our face was three Kingfishers – the first we have seen on this trip. They are so difficult to spot but once you have seen one it is easier to see others.

So all went well on the river and then came into the canal and started climbing the six locks. First lock was fine, second lock which is the really deep one at 19 foot 5” did not go so well. We lost reverse. We had forward propulsion in forward mode, neutral mode and reverse mode!!! When were entering the lock there was another boat with us and they were very inexperienced hire boaters so we were taking things very slowly thankfully. We still hit the end of the cill and with 20 tons of steel, that is a lot of momentum. No damage done which is why fenders are so important. We did lose a clock from a shelf inside which no longer works but that is small fry compared to what could have happened.

We convinced the other boaters to let us tie bow and stern to their boat and for them to drag us up the rest of the flight. There were three of them, two guys and a girl and between them they had one brain. One of them had won a four day narrowboat hire on some game show but there was no enthusiasm there. We spoke to Brains who was most obliging, so with his help we got to the top of the locks and tied up.

Fras dug down into Ange De L’Eau’s motor area and popped up with this.

This very small insignificant flange was what was between us remaining stationary or moving forward. It came off the accelerator cable that secured it down to the engine and enabled you to go backwards or forwards. If we could find somewhere to get the part, Fras could replace it for just the cost of the part. What a win that would be.

We were illegally moored on bollards that are used by other boats to enter and exit the locks but we stuck a broken boat sign up to hopefully reduce the risk of crummy boaters having a go at us. As it was, no other boaters came passed us, so we were in luck. The other good thing was we did achieve getting back on the canal before the weather broke.