The plan as mentioned in yesterday’s blog was to head off early in the morning and be at the Brentford Lock at 8.00am to be let onto the Thames River. Our day started to go awry before even the alarm clock went off as the planes going into Heathrow started up in fury at 6.00am in 45 seconds intervals. They seem to use the Thames to mark when to drop their landing gear so that gives you an idea as to how low they are. This picture doesn’t quite do it justice but there were numerous jet streams above us. 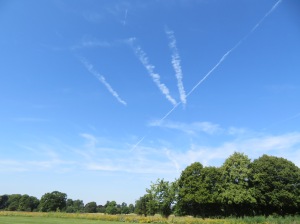 We made our way down to the lock in plenty of time and were all suitably dressed up with our life jackets on and all neat and ship shape. Toque had had forced ablutions as not sure how long we would be on the tidal portion of the Thames for.

The lock keepers arrived and after discussions with them it was decided that we wouldn’t attempt it until this afternoon. As we all know, tide times change each day but the lock keepers 8-4 day does not change. This meant we would be forcing against a turning 8 knot tide for up to an hour and for a narrowboat that could potentially be very unsafe. The gates will open again at 5.30pm which is one hour before high tide so that will be more than enough time for us to get to the tidal Teddington Lock. With an incoming high tide like that we should be able to pull a water skier.

By now the day was starting to really warm up so we winded (Canal term for turning around) and went back to our previous mooring spot which offered us significant shade. By leaving in the afternoon like this it has put us behind on our timetable but we feel with the good weather today we can continue on cruising into the early evening.

Our next big decision was, what do we do for the rest of the day. Considering it was still coolish and provided we stayed in the shade and near the water we could remain cool if we went for a walk. We wandered down towards the river looking for Syon Gardens and House, a state.y pile dating largely from the 16th Century and a hugely popular visitor attraction. No dogs were allowed in the gardens so we continued further down to a lovely river town called Isleworth which sits on the northern bank. There is an island in the middle of the Thames just here called Eel Pie Island which gained its name from a local delicacy as indicated in the name of the island. 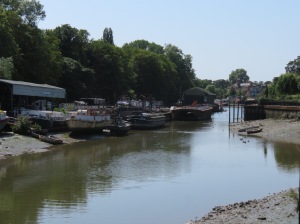 This photo is taken on the north side of the island and half an hour later it looked like this, below. 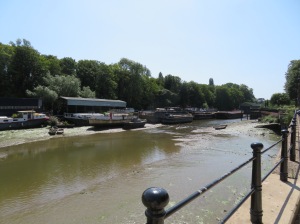 The tides can be up to 8 metres here but to think it goes down to this trickle in some places explains why they don’t let us out during low tide. 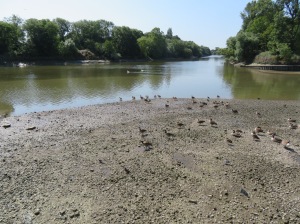 This is the south side of the island which is the main channel but even here it is very low. When the tide is out the bottom of the river looks pretty disgusting. 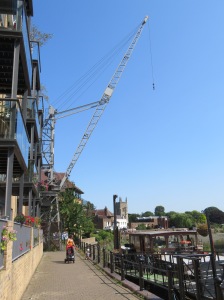 You get a real feeling of history when wandering around these areas. 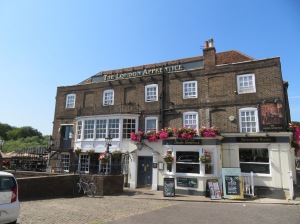 The pubs were gorgeous and we dropped into one for a cooling drink and to rest up before heading back to the boat. Whilst partaking in the cool drink, the announcement of the new Prime Minister was made which brought out some interesting local reactions. We were here in 2016 when they had the referendum and it hasn’t progressed any further since then. Not sure how Boris the Buffoon is going to go but he got two thirds of the vote, so maybe there is something positive about him that hasn’t come out yet.

Back at the boat it was now 31c and getting warmer so we headed back down to the lock so we could be first off the grid.

It was then into the lock with another boat and after only a small drop in the lock we were out onto the Thames.

We had an hour of cruising until we got to the Teddington Lock which we made in plenty of time. It was now getting busy on the river with much larger craft and wakes being made which flat bottomed boats like us do not handle that well. 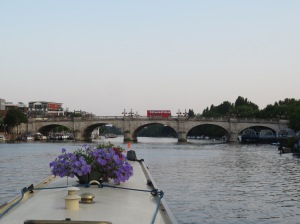 By now it was nearly 7.00pm and we still had another hour of cruising as we wanted to moor up at Hampton Court Palace.

It was now starting to get ultra busy on the river with speed boats, narrowboats, yachts, paddle boarders, big cruise boats and rowers. You needed eyes in the back of your head to keep on top of it all. 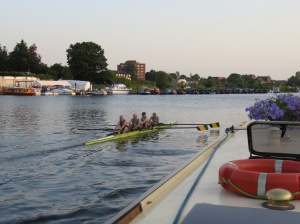 There are some truly magnificent dwellings along the river banks and expensive boats. 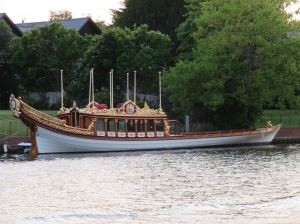 This is the royal barge Gloriana which is a 90-foot-long (27 m) British royal barge. She was privately commissioned as a tribute to Queen Elizabeth II for her 2012 Diamond Jubilee, and was the lead vessel in the Thames Diamond Jubilee Pageant. We were very surprised to find it just parked up like that. One would have thought it would be in dry dock as it is a wooden boat.

We made it to our mooring as the sun was setting at 8.45pm right outside the gates of Hampton Royal Palace. Pretty cool you can do this and get to enjoy the gardens without paying for it.