We had an appointment at the dog groomers this morning at 10.00am so that dictated the start of our day. The closest one we had found was four blocks from here in Hyde Park Square. Don’t think we could have found a more exclusive or expensive one. After dropping Toque off we did mention her separation anxiety and her ability to scream the place down. We were assured that neither was a problem and to pick her up at 1.00pm. We gave them the option to call us if she was done earlier.

So being dog free we made our way down to Marble Arch where we caught a tube to Kings Cross.

We wanted to see platform 9 ¾ from where the Hogwarts train left from. Goodness, we could not believe the queue. You could get your photo done professionally or do it yourself.

There was also a Harry Potter store opened right next to it that also had a controlled queue into it. We decided a cup of coffee was more up our alley so we walked across to St Pancras Station where the Eurostar leaves from for a comfortable sit down. 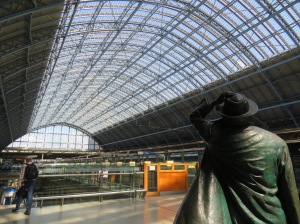 It is quite amazing how they have adapted these old railway stations into modern, high class comfortable buildings but still maintained the beauty of them.

Whilst waiting around we were taken in by the beautiful piano music being played by a young lad. Street or public pianos are now quite commonplace, often located in railways stations or public spaces for anyone to play. The first public piano was in Sheffield in 2003, with a friendly “Play me” sign on it. It proved hugely popular and in 2008 the Play Me I’m Yours project, created by artist Luke Jerram, was first commissioned in Birmingham, UK, with 15 street pianos located across the city. Within just a few weeks it was estimated that over 140,000 people played or listened to music from the pianos. The project has since gone from strength to strength, with more than 1900 street pianos located in 70 cities worldwide.

Just as he had finished playing we got a call from the groomer that Toque was ready to be picked up. What was meant to be a three hour break turned into one and a half hours. It took us a little while to get back to pick her up but it appeared they were more than ready to hand her back to us. We did warn them!! She had done a great groom on her though and she should be a lot cooler going forward.

We returned to the boat for some lunch and to try and escape out of the heat. Fraser opted to go and see the London Museum whilst Di took an afternoon off catching up on a few tasks. Toque wasn’t letting Di out of her sight!!!

Fraser found the London Museum a little less than rewarding as it spent a lot of real estate going back to medieval times rather than more modern history. What was interesting was that between 1939 to the early 1980’s, London’s population went backwards. There can be a lot of reasons attributed to this and early on we would say it was about who wanted to live in a bombed out city. 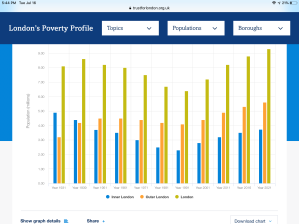 We found this graph rather interesting as London did not exceed the 1939 population level until 2015. Reading further about the standard of living in London for the future did not bode well as it stated that London will slip behind Athens – sobering thought.

The remainder of the day was spent getting ready to head out tomorrow to Limehouse. After being off line so to speak for the last four days, we have a lot of water to replenish, rubbish to dump, food to stock up on and let’s not mention the elsan.