The challenge today, if you could call it that was to do another twelve locks and eleven miles. This would take us to the bottom of the Foxton Locks. These Canal we have been doing the last few days and up to the bottom of the locks is all new for us. We also went through the 800m Saddington Tunnel. 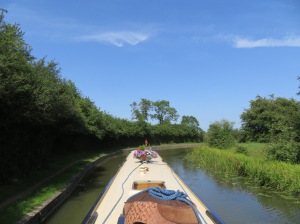 As you can see from the above picture, it was great weather though cool and windy. Being windy always gives us an excuse to blame any driving errors on the wind. 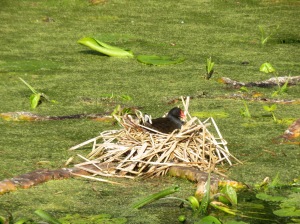 There is an abundance of Moorehens along the canals and were surprised to see this one still nesting. We are a little late in the season to see the baby goslings or ducks which is always so cute. 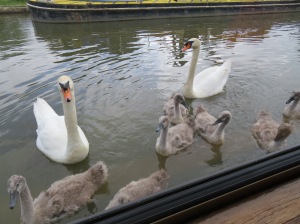 These parent swans were teaching their seven goslings the very bad habit of begging for food from the boats. They got agitated when they saw Toque on the boat and one of the adults reached into the bow area hissing alarmingly at her. Toque seemed to know to keep her distance. 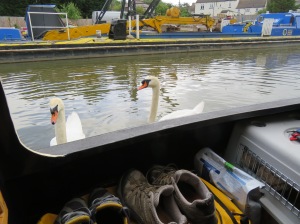 Just before we headed off for the day, Di took Toque off the boat for a toilet break and one of the adult swans got out of the canal and threatened them so much that they could not get back on the boat. They walked down the towpath until they came to a bridge underpass where they got back on. Underpasses are usually narrow and therefore it is easier to step back on a moving boat.

There has been very little traffic on the canals so far but we reckon that once we get down closer to Braunston that that will change.

We are settling back into the boating lifestyle and it is just like getting back on a bike. Wolfgang and Marlene have been going over the details and idiosyncrasies of Ange De L’Eau. There is a lot to remember and of course to do besides just cruising the canals. With the four of us we just seem to naturally know what to do. Fras has picked up poo duty which involves emptying the toilet cassette about every day as four people have an amazing amount of output. This gives Wolfgang a break. 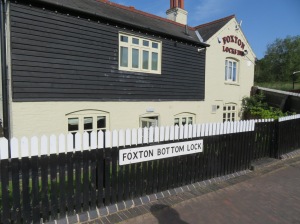 We made it to Foxton Locks at 5.00pm but it was too late to go up the flight as they only open it from 10am to 4pm. It was no problem as we will be the first to go through in the morning. At Foxton you have the Leicester Canal/Grand Union Canal (the one we came down on) and the arm of the Grand Union from Market Harborough. This area gets incredibly busy as you can imagine. In the days when the canals were the main transport links, this area was a real choke point so some ingenious person came up with the idea of building an incline plane. This reduced the problem considerably but was only in use from 1900 until 1910. The concrete that was used and the wheels of the caissons were constantly having to be repaired due to the weight of the water, boat and shipment load. 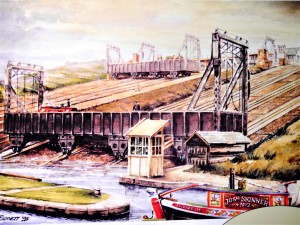 Unfortunately there are no longer any incline planes working in the UK anymore though there is one in France or Spain. It is a little difficult to describe what an incline plane is and how it works so have just included this picture. 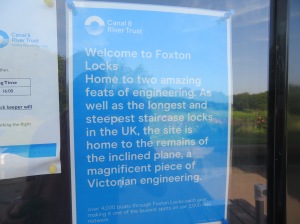 It seemed that once the steam engine came along in the early 1800’s, the British industrial revolution just took off and so many other inventions came along like the incline plane. 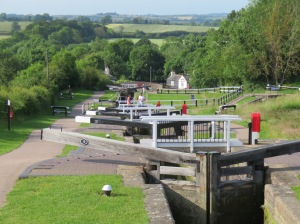 A view of half of the Foxton staircase that we will be doing tomorrow morning. 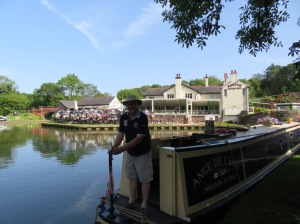 Dinner tonight was at the pub/restaurant that you can see behind Wolfgang which was more than perfectly satisfactory.