Last atoll on the trip. The atoll of Fakava is in a rectangular shape but about 60% of it is now under water. These atolls can sink up to a metre a year until eventually they disappear altogether. Fakava to us looks like it will more likely be gone within the next twenty years if not sooner.

So far the beaches on the islands have been made up of coral chunks which are a little tough on your feet but this one has been finely crushed up to almost be like sand. Found this little gem of a place on our walk along the island.

It was about 30+ and the water lukewarm. So warm that when you strolled in it felt like your own body temperature. Di pictured here with Dale who comes from Ontario and travelling on her own, so we have semi adopted her – lovely lady.

They do this very strange thing with their boats in that they lift them out of the water onto these dry dock arrangements which look flimsy. We can’t seem to find out why they might do it but it might be something to do with the salt content of the water. We have amazing buoyancy in the water and when snorkeling it is difficult to dive down.

We are snorkeled out so decision was made just to wander around for a few hours and then head back to the air conditioning!! 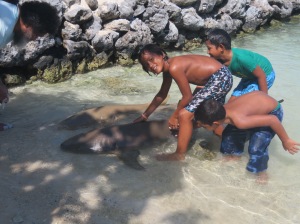 We found these local lads patting and feeding these grey nurse sharks with adult supervision. Couldn’t believe how close they came to the edge of the water. We later saw a stupid tourist hanging onto the top fin of one of these sharks and riding it like a dolphin. The poor shark was very distressed and was trying to swim away from her. Of course if it bit her, we all know what would happen to the poor shark. These are the people that should never be allowed out of their cage!!

Found this great T-shirt that has most of the French Polynesian Islands on it and it was specifically bought in orange as it is Kings Day in the Netherlands and we have celebrations tonight and have been asked to wear something orange.

All the islands are running into a bit of a blur for us now, but we come away with very positives memories of the beauty of the ocean and lush mountainous terrain and not forgetting to mention the friendly and open nature of all the islanders. 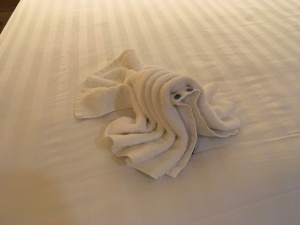 Crayfish or lobster, whichever part of the world you come from – 17/17.