So nearly three days have gone since the last lot of blogging but you kind of need something to write about. We spent the previous two days hanging around the apartment at Henty putting the final touches on Frasers fathers bedroom and sorting through some of his myriad of stationary.

Yesterday was house moving day again as Frasers folks were returning from their trip to Adelaide where they had been celebrating a family friends 90th. So we were move to our good friend Belinda’s place in Heidelberg who we stayed with when we first arrived in Melbourne back in mid October. On our way out there we went and had some dinner with Colin and Mary who we met through our good canal buddies (BFF’s) Wolfgang and Marlene in England in 2017.

We always get very nostalgic when we talk Canals as many as you may know. There are plans afoot of possibly meeting up with Colin and Mary in July and buddy up on the way to London. The Grand Union Canal is broad locks which are very heavy and slow but if you have a “dancing partner”, it makes it a lot easier.

We didn’t turn up to Belinda’s until nearly 11.00am and felt a bit guilty being so late but she was very forgiving. We stayed up until nearly midnight catching up on happenings. She has started some substantial renovations and the painting has commenced and already with the white walls the house has been freshened up. We are looking forward to seeing her plans for her new kitchen!!!

So this morning we headed out and back towards the city as we were off to the women’s semi final tennis. They had been warning us that the temperatures were going to reach into the high 30’s but once again,mthey got it wrong. Four games into the first set, they had to close the roof to the Rod Laver Arena as it got to 40c. The good side with that was that we got to sit in air conditioning for the rest of the tennis – yippee!!! So the photo above is of the famous Australian Tennis player, Rod Laver. Laver’s 200 singles titles are the most in tennis history. This included his all-time men’s record of 10 or more titles per year for seven consecutive years (1964–70). He excelled on all of the court surfaces of his time: grass, clay, hard, carpet, and wood/parquet. He is currently still alive and has been watching the tennis live.

Sitting in the audience was Anna Wintour, Nicole Kidman and Keith Urban. Kidman sat next to her husband for most of the game and from our vantage point it looked like she was clutching his crutch the whole time. It got Di and the stranger next to her having a good old giggle. 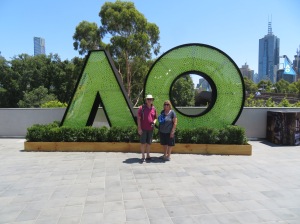 Frasers sister Amanda came with us to the tennis as we shouted her a ticket for the day as it was her 60th earlier this week. She was a keen tennis player when she was much younger so a day at the tennis was right up her alley.

Today Australia sweltered under the most appalling of temperatures with the hottest place in South Australia at 49.1c. Adelaide blew its record at 46.6c today and are expecting brown outs tomorrow. In Melbourne tomorrow we are expecting 43c which means it will get hotter than that. Walking home from the tennis tonight was just ugly+++++. So oppressive and it felt like we were walking in an oven. The heat radiating up from the ground was unforgiving.

Australias hottest temperature ever recorded was 50.7 °C (123.3 °F) at Oodnadatta on 2 January 1960. Why is it we are attracted to countries with the most extreme of weathers. Last Christmas/New Year we were freezing our butts off in Calgary at -32c. We really do need our heads read.