Very little to comment on today. Starting off this morning was like getting out into the slip stream of the continuous line of boats that were making their way down the Grand Union Canal.

Where we are currently is at probably the busiest area of the entire canal network. Around us are multiple marinas, hire boat bases, converging canals and locks. 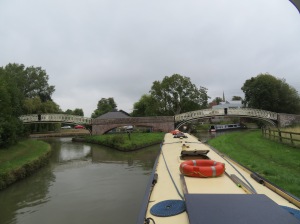 We joined up with a boat of our party goers last night who informed us that they were from an Employment Agency who specialized in Marketing placements…….hmmm, sounds like a cushy number where your boss sends 50 of you off on a two day narrowboating journey for a bonding exercise. The boat load we locked with were saying they had also been given other tasks to do such as a 500 piece jigsaw and already they had given up…..no comment!!!! 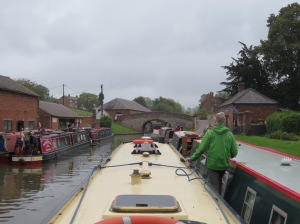 We pulled into the home of Ange De L’Eau and gave her a hearty drink of diesel and were going to head out for another hour when we took a phone call from Simon and Joannie. It appears Ms Maples has got herself into a bit of bother and the vet is not sure what is going on. It could be anything from something in her paw to possibly a pinched nerve in one of her front legs. We will just have to wait and see but the guys are doing an admirable job keeping on top of it. It is a tough ask to request some one look after your precious fur babies and then they don’t co-operate by getting themselves unwell!!!

As it was after 3.00pm and the sky was starting to darken yet again we decided we would pull up for the night. Not sure if we are parked illegally or not as we are just outside the marina but the staff have all gone home for the evening so providing we get away early in the morning it shouldn’t be a problem.