Full on toeurist day today courtesy of the excellent weather we awoke to. This is the view from our balcony. 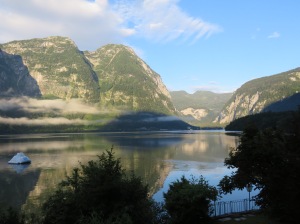 The hotel we are staying in for two nights is extremely poor value but it trades on its location and the fact that all the rooms have balconies facing the lake. Anyway, we are only here for a couple of nights.

Our first challenge of the day was to bike up this damn steep hill to catch the cable car up to the Daschstein mountains which are the tallest in Upper Austria – it is an important mountain and very well known in the Salzburg region. It makes us giggle as how everywhere you go they make it that they are the biggest and best in something – bit sad really.

We were up there by 9.30am so beat the crowds and also being early the winds are favourable for these guys and gals.

How cool is that eh!!! Di would really like to do a tandem one time whereas Fras wants to keep his feet firmly on terra firma. It might be one of those things she ticks off her bucket list for her 60th birthday celebrations which she has informed Fraser will be going for a full twelve months and leave him desperately poor!!!

They had just built this observation platform that they called the five fingers. It was a bit weird but we partook in the weirdness of it. This was Fraser’s weird choice and…..

this was Di’s weird choice.

It was remarkably warm whilst we were up there so took the chance to have a good wander around. Not enough superlatives to tell you how magnificent the views were.

Guess if there was one place in the world you would do a tandem jump from this would be it. We watched them for quite some time looking for the right winds and once they were up they rode on the thermals for well over half an hour. 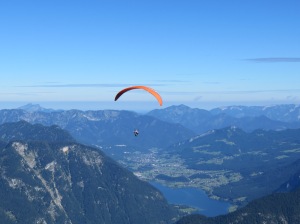 Next it was back to the bikes and then a five k ride around the south of the lake to the very famous town called Hallstatt. Many of you will know the picture which is on all the Austrian tourist advertising brochures.

We got there about 1.00pm and it was full of people just like us – Tomsmy the Tourist. It really was wall to wall people. The best time to get to these sorts of places is about 5.00pm when all the tourists are leaving and the light is good for taking photos. We tried to find the perfect spot where the photo they use in all the advertising is taken from but we worked out it was probably taken by a drone in the middle of the lake – that was just not going to happen for us.

We also took a photo from the other side of the town and we thought it was just as nice. 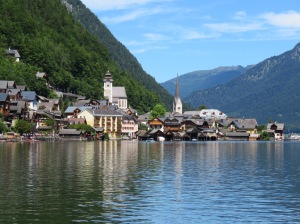 This place is a UNESCO site which means there are a lot of tourists coming through and you do have to feel sorry for the local villagers. Hallstatt was originally founded due to the discovery of salt in the region and it had its own tourist salt mine, the same as what we saw in Hallein last week.

Have a close look at this photo and you will see it is an espalier but the unusual thing about this one is that instead of a Rose bush it is actually a pear tree. We saw a couple of wonderful examples of this in the village.

After wandering around in town for a couple of hours with pretty warm temperatures and trying to avoid all the other tourists, we leapt back on our jalopies and headed back to Obertraun where Fras jumped in the lake to cool off. We had been told that the lakes up here were warmer than Zell am See but that turned out to be a lot of codwallapse (bullshit) according to Fras.