The weather forecast for today wasn’t the best and we had been hoping to head up to Berchtesgaden to the Eagles Nest. When last in the area back in 1991, we were unable to head up there due to be it being February and the road up there is closed during the winter months.

We left Hallein this morning on our bikes in very light showers and headed to our hotel for the evening. We didn’t chose our place particularly wisely as it was/is five kilometres still from the centre of Salzburg. Not sure what we were thinking.

Anyway, we got in at 9.30 in the morning to the hotel, dumped our stuff and had a quick change and then headed back to the Main Street on foot to catch a bus to Berchtesgaden which was about 20k away. At this point we were starting to see some light blue skies which was encouraging.

We were not quite sure the process to getting up to the Eagles nest but we discovered that it would take three buses and an elevator. In all it took over two hours to finally get there and thankfully the weather held. We also crossed back into Germany.

Once we got to Berchtesgaden we then transferred to another bus for a ten minute ride up a hill. Once there we arrived at the formal entrance to the Eagles Nest. We won’t go into the history of the building of it or why it was built as then you start to get into the realm of the whole Nazi thing which we will leave you to google. 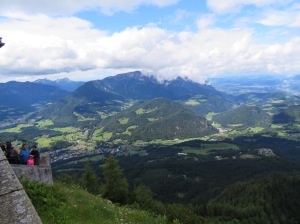 It was then a twenty minute ride up an extremely narrow road which only allowed one way traffic. The view down into the valley was spectacular but our hearts were in our throats as the bus was very close to the edge. There were five tunnels plus one switchback to tackle.

Once up the top we then walked along a very cold tunnel. Hitler use to be driven along this tunnel to where the elevator went up a further 124 meters to the top. 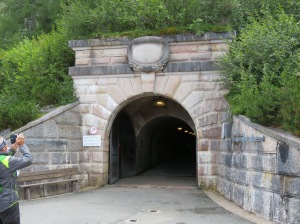 We couldn’t believe how lucky we were with the weather as we had clear skies up there.

We opted to have some lunch up at the Eagles Nest.

We got the quintessential view back towards the actual Eagles Nest. 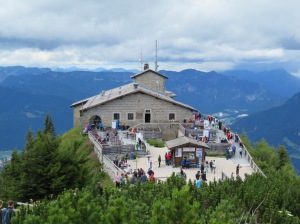 In a sunny corridor there was some history on the making of the Eagles Nest but if you wanted further information regarding Hitler and his cronies they had a “documentation” centre that they were referring you to back down in the valley. It was almost as if they were trying to separate the Eagles Nest from the terrible nazi emporium as they were wanting you to see the Eagles Nest for the beauty it was and the view it gave you. 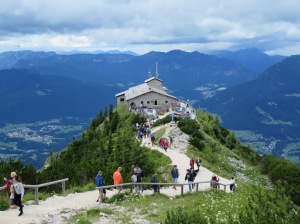 They were not denying it at all but we think they were wanting to separate the seriousness of it into an area where it was all bared open. Time didn’t permit us to go through this area. The Germans do not openly encourage/advertise the Eagles Nest as it is still such a hideous part of their history.

We have spoken on a number of occasions to our good German friends Elfi, Horst and Marlene and Wolfgang regarding the Nazi regime and it is very sobering the conversations we have had with them. At the end of the day, they are just like us, decent human beings with a conscience.

Enough heavy stuff. Below is a screen capture for the weather that we are expecting tomorrow for our trip up to St Wolfgangsee which is in the lakes district near Salzburg. They have red weather alerts out tomorrow for areas of southern Germany and Austria which is exactly where we are – oh, aren’t we just so lucky!!!!