We have spent the last few days staying with Elfi and Horst in their home in Aschaffenburg recovering from our trip down the Moselle. As all travellers know, there is nothing quite like getting all your laundry done in a proper washing machine and also reorganizing yourself ready for the next adventure.

We spent the two days with the guys chilling out, visiting their local Biergarten and partaking in a bevie of the local amber and having a short bike ride around town – just to keep in the swing of things and not let our bums slacken off. On the last night we went out for dinner and afterwards walked around the old town and dropped in and saw a small portion of the Aschaffenburg castle. There is an interesting link between the castle in Aschaffenburg and the Leeds castle in the UK and it has to do with an illicit affair – what else!!!

Today we have started Phase 6 of the Odyssey which is the second bike ride. We travelled by train with our bikes from Aschaffenburg to Interlaken. Interlaken is in the centre of Switzerland. There is a bit of history here for us as back in 2014 we biked from Geneva to Interlaken which is half way across Switzerland. So now we are going to do the second half and hopefully touch the post in Bregenz. Bregenz sits in the eastern corner of Switzerland where Austria, Germany and Switzerland meet.

Looking at our bike touring guide something tells us that this part of the bike ride might not be as easy as the first part across Switzerland. Also, we are not as fit this time and three years older – what have we done!!!!

It has been quite a challenge organizing the train trips for the bikes. We bought a Euro-rail pass for ourselves but we have to reserve spots on the trains for the bikes and they only allow ten bikes per train. These spots book up very quickly. Also, if you are travelling by bike you are not allowed on the ICE trains which make for fast and efficient travel. So hence, the puddle jumpers.

Bike theft in Europe is huge with most of the bikes either going to Poland or the eastern bloc countries. Once we have the bikes on the trains we lock them together and take our panniers off and find a seat. Each time the train stops one of us goes down to the bikes and observes no-one tries to pinch them – sad indictment of the human race.

So our trip today commenced with an early start – yet again. Horst was a true romantic and picked one of his roses for Di and secured it to her bike. Hope it survives for a few days.

Elfi, Di and Fras rode their bikes to the hauftbahhof whilst Horst drove the car. We did our fond farewells and headed off to firstly Mainz. We then swapped for a train to Interlaken – the trip being 9 hours in duration.

It was lovely and reassuring to know that if we have any problems Horst and Elfi have told us to contact them. Such a great security blanket to have. What good friends are all about.

What started out as a very organised train trip started to turn to shit after our first train swap. The train was 35 minutes late – well we could handle this. Then when our train arrived our bikes had been booked for one end of the train whilst our first class seats were at the other end. After securing them firmly we made our long haul trek to the other end of the train where we sat very comfortably for about two hours. We then had to move to second class as our ticket changed once we got into Switzerland. We thought it might be better if we leapt off the train at the next stop and carry our panniers along the platform back to our bikes. We had two minutes which was plenty of time but we think as the train was running late the buggers reduced the time. Di was a good carriage length behind Fraser when they blew the whistle to leave. Di leapt into the first open door of which the door shut on her arm causing a crunched arm and bruising. Meantime, Fraser was caught outside a door that would not open and he started to panic as he hadn’t seen Di get onto the train. He raced back along the platform to the conductor who was just hanging outside a carriage and who was nonchalantly watching the whole affair, and just made it back on. The conductor said that his “woman” had made it on!!! That rattled us.

Next calamity – we were of the understanding that when we crossed the German/Swiss border that there would be no need to swap trains and that we would go straight through to Interlaken – oh so WRONG!!! As the train pulled into Basel station they said that the train was terminating which gave us minimal time to gather everything together, unlock the bikes and take them down from the hanging racks and clamber out of the carriage – no mean feat we can tell you!! In the process of rushing Di got smacked in the top lip by the bike handle – many cussing words and tears to her eyes.

Got off the train in time to swap to another train which turned out would not take us into Interlaken but 20 k’s shy – are you starting to get a handle on our frustration levels. We know it is only a one world problem but heaving luggage and bikes on and off trains and up and down platforms is difficult. The bottom line is that we finally made it to Interlaken only ½ and hour late and relatively speaking, one piece but damaged.

So, as mentioned, we have been to Interlaken before – a few times before actually. The scenery still takes our breath away. This is the view from our hotel balcony. 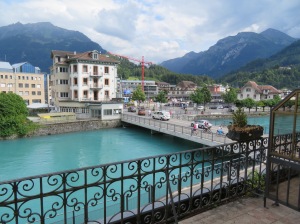 When we were here three years ago we splurged and stayed at the Prince George which the name tells you was quite ponsie. We were working then but now that we are retirees we need to be more responsible so booked into the Hotel Central, Continental. In her hey day she would have been quite the beauty but alas no one has shown the old girl much tender loving care for quite some years and she is showing it.

To give you an idea just how expensive this hotel is, we paid $250CDN for the night and that is considered cheap. The good thing about these old hotels is that the rooms are very spacious. 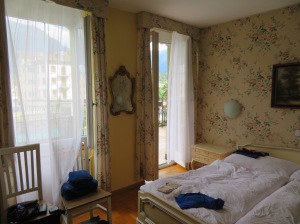 We went for a little wander down the Main Street to pick up a few supplies for the next two days. That is when the heavens opened on us. Weather tomorrow for our first day of biking is meant to be fine in the morning but rain clouds building up in the afternoon. At least it will be on the coolish side. Will give you an update at the end of tomorrow as to just how accurate the forecasters were.

At present the rivers are at full flow with the snow melt and the colour is a magical emerald green.

This isn’t a spectacularly stunning photo but is of a park in the centre of town where the tandem paragliders land. Di is very tempted to try it but not enough time – Fraser breaths a sigh of relief as at $250CDN it ain’t cheap. Just under where the tree hangs over, is where they launch themselves from.

When you do a fair amount of travel you become very inventive especially if your wardrobe is very limited and you have to wash and dry your “smalls” each night – tonight, Fraser excelled himself for ingenuity. Not sure if Di is too keen on her putting her underwear out there on the World Wide Web!! 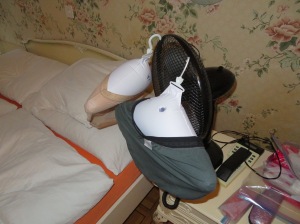