Big day today as have booked a full day on the famous Flam Railway which takes us by train to the Aurlandsfjord, along the fjord by boat, back up the windy hill via bus back to Voss where we meet the train back to Bergen. It was an 8.30 am start and home by 9.00pm. 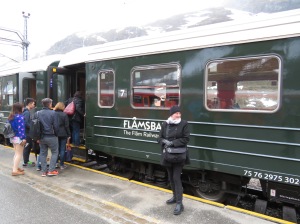 Weather was overcast with annoying rain to start the day with. Got to the station half an hour early and the queue was already out the door – obviously very well known and popular.
Climbed out from Bergen along a picturesque route with many tiny villages hanging onto the side of the rocks and amongst lush temperate forest. Our photos are not going to do this scenery justice.

Once we were up at the top at a small hamlet called Myrdal, we swapped train onto the Flambana which took us down to Flam in the bottom of the Aurlandsfjord.
The mountains rivers, streams and multiple waterfalls are all in full bloom. Spectacular to say the least. 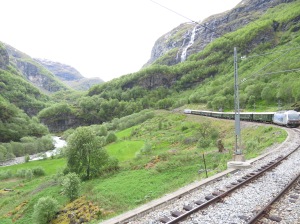 The train stopped a little way down the steep grade which is 1/18 – second steepest in the world for a non cog railroad. We got out to take pictures of this voluminous waterfall when out pops this fairy prancing around in her red outfit on a rocky outcrop. She had longe blond Nordic hair and was busy swaying to and fro to this mythical music that was playing in the background. Now you can all tell that the way we are writing this, that we are about to burst your bubble and bring you back to reality. Using the zoom on the camera we reckon he/she was an exhibitionist cross dresser. Hardly worth the pen to paper effort. Guess Norway is always known for its creepy trolls, mythical fairies and Nordic gods. 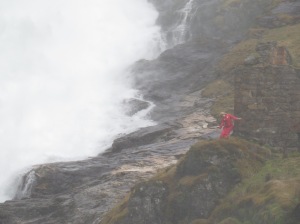 It was a very steep descent into Flam and wham, low and behold as soon as we come around the last bend there was this bloody big cruise ship parked there. This is for Patti, Pete, Sue and Steve – it was the MSC Fantasia which we saw in Stockholm and we think in Copenhagen. It’s now stalking us around Norway. 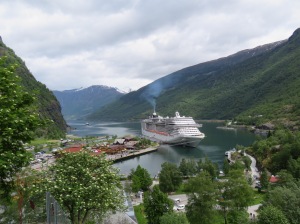 Flam has a population of 400 – not today!!!! It was probably increased to 4,000 if you count all the buses, trains, cruise ship and small day fjord cruise boats. We had three hours to while away so went for a small walk out of town and up to a look out. Found a comfy possie to eat our lunch, courtesy our breakfast place and take in the crowds. By now the mist was lifting and we were seeing slightly bluer sky – slightly being the key word here. The precipitation had ceased. 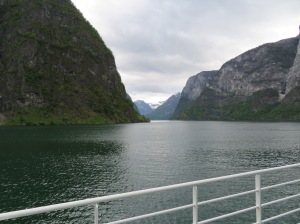 At 3.00pm we made our way onto a small passenger boat and headed out down the fjord. The cruise took two hours and we got off at Gudvangen to catch a bus back up the hill to Voss. It started to rain the last half hour of the cruise and the waterfalls came alive even more. We have taken over sixty photos today but none of them capture the true essence of the scenery or the waterfalls. 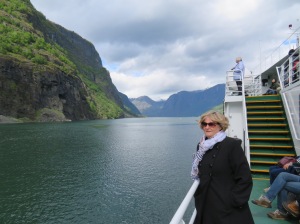 The bus took us through a number of tunnels and then he did a right hand turn, dropped some people off at a hotel and commenced descending down this very uncomfortable feeling hairpin road. We did about 15 switchbacks and you could hear him riding the air brakes big time. Di was a little unnerved by it all but it was well worth the sudden trip to the bog at the end of it. 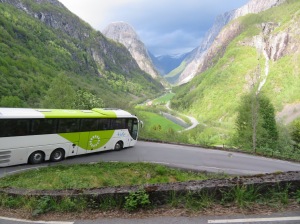 The sun came out in full force at 7.00pm in time for us to get back on the train to Bergen. We are both pretty knackered with a touch of the sun.
Off to Stavenger tomorrow!!!