Hello and welcome back to those of you who followed our nb Lucy blog in 2016 and also welcome to our newbies. Since we last put pen to paper over five months ago a lot has changed for us.

Firstly we returned to Calgary to find we had both been “liberated” from our place of employment which really was not unexpected. This has given us an opportunity to get out there and do some of the more vigorous travel that we want to do before the old bodies start disintergrating further.

As many of you would know, we got onto those spreadsheets tout de suite to start planning our next trip. Hence, this is why the first blog is now being written for our next adventure. Our grand tour does not commence until the 29th April 2017 but we need to set up the blog site with new photos and check how to use it with an ipad as last time we had the computer with us. Ipads are not quite as friendly when it comes to creating directories.

This trip is extremely varied and apart from a space ship just about every other mode of transport is incorporated. The one disappointment is that the girls (Maples and Toque) will not be able to join us due to the variety of the activities and the many different European countries involved. They and the house are being looked after by a French Canadian couple called Joannie and Simon from Montreal who will be driving all the way across the country to take care of them. We used a House Sitting website and though it may seem risky we feel we have done our due diligence and using our gut feelings are happy for them to take our girls on.

The duration of the trip is four and a half months commencing as we mentioned on the 29th April 2017 and finishing back in Calgary on the 21st September 2017. What originally started out as a four month cycling tour around central Europe has ended up quite differently due to the fact that you are only allowed 90 days in 180 days in the Schenigen zone. You may well be scratching your heads, just like we did. It was only by luck that we found out about what was a new rule to us. All you antipodeans may well want to look up this Schenigen zone business. This has meant a huge change in our original plan. Also, a bit of common sense prevailed, as four months on a bike is somewhat unrealistic.

So a quick intro to the tour. We start off with a cruise across the Atlantic, followed by a cruise of the Baltic region (provided Putin hasn’t annexed the area); then 11 days on a self guided tour through southern Norway; nine days in Hilversum in Amsterdam looking after Ali and Ads teenage children Ollie and Millie (who are rubbing their hands together) and Bronte the dog whilst mum and dad attend a wedding in New York; then seven day cycling/boating trip down the Mosel with Horst and Elfi; then 9 day bike ride across the other half of Switzerland that we started four years ago; week in England with Wolfgang and Marlene doing the Brecon Beacon canal; back to Austria for another 17 day bike ride around the mountains; then south of France at a place called Rodez to catch up with Belinda and Dom and their children for three days; our 90 days are now up so over to the UK again for a week with our good friends Eirian and Dewi in the North of Wales; week catching up with Doreen, Lynne and John around Birmingham and finally three weeks on the Ange de L’eau looking after her whilst Wolfgang and Marlene go to Munich for family celebrations; and finally our farewells and back to Calgary. So, simple enough for you. This has taken quite the planning and without our good friends Horst and Elfi in Aschaffenburg to put us up and help with our washing between all these trips we would be a lot lost. In fact it couldn’t happen.

We tried to attach the itinerary but it was too large……understandable considering.

A photo of Ange De L’eau who we will be looking after for Marlene and Wolfgang in September 2017. 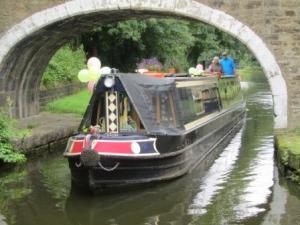 Due to the nature of the trip we do not think we will be able to blog every night so unlike nb Lucy posts they will be quite spasmodic. Whilst on the high seas of the Atlantic there definitely will not be any postings as we don’t think there are too many cell phone towers out there. So bear with us.