Awoke to another gorgeous day – the gods are looking kindly upon us – well, for the moment anyway.

We had an appointment today at 1.00pm at Lock 24E with the Canal and River Trust people who were going to take us through the lock. The reason for this being the fact that it is a guillotine lock. The purpose for this most unusual lock is because it is right next to a road/foot bridge and if you used the conventional lock arrangement the arms of the doors would swing out into the traffic.

So to make sure we made it on time we left at 9.30am from Lock 31E where we stayed the night. We had moored along the towpath in the middle of a country area. It was very quiet and picturesque. We cruised through some magnificent countryside but unfortunately the photos just do not do it justice yet again. The level of the water in the canal is extremely high and if the pound below the lock we emptied was a small pound it was flowing over the edge onto the footpath. One jogger glowered at us and muttered under his breath. 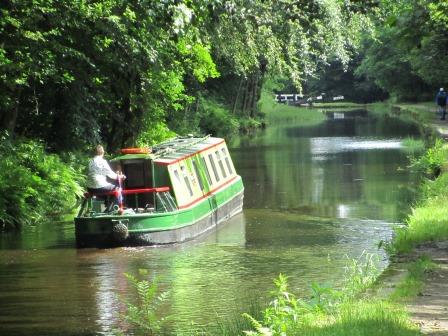 Di did three locks today – they were bloody tough when winding up the paddles. 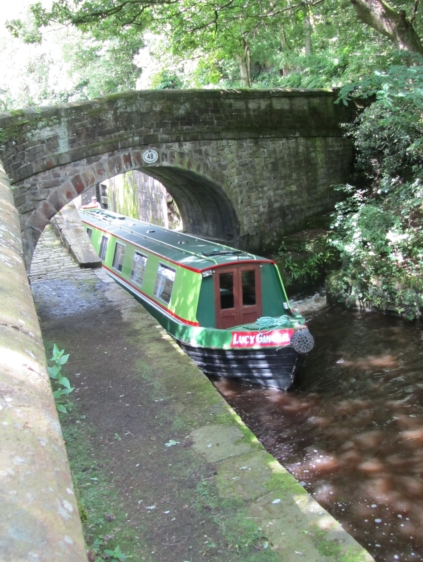 You can just see on this picture how high the water level is. In a couple of instances the water was flowing over the top of the gates which meant that it was filling the lock up quickly and for us that was a bonus. We have seen very few other boaters on this canal which has been wonderful for us but not sure long term what it will mean for the canal.

So you can see the stone road bridge right behind the guillotine which demonstrates quite clearly why the traditional gate system would not have worked. This was an extremely deep lock also. Everything on the canal system is numbered including locks, bridges, swing bridges, foot bridges which can be quite confusing as each one has it’s own numbering system. In this case you can just make out the number 47 which is for the bridge yet the guillotine lock is actually 24E. The E in this case standing for east of the tunnel we went through a few days back.

We have moored up at a little place called Slaithwaite which is a town that is being rejuvenated. Many little towns High Streets have been decimated due to Tesco’s or Morrison large food stores coming into town and selling cheap goods in which the little stores cannot compete with. In this case the butcher, candy (lolly) shop, gift shops, grocery store and vegie shop are still thriving. There is also a lot of housing construction going on and what is great about this is that they are using the local stone which is very light in colour and appealing to the eye. There is also a large cotton mill that has been disused for many years and they are gutting it and repurposing it for a small inside market plus office space. Don’t know why some of these towns are surviving and others are not but it is great to see.

We went and had lunch in a bakery that is a not for profit business and all the goods were home made – gosh it was scrummy!!. We were meant to do some laundry also but the laundromat was closed so will just have to stay whiffy for a few more days. Went off food shopping instead with our trusty trolleys – alas though, the green machine lost a wheel. Not surprising as we had loaded it up with heavy items a couple of weeks ago and busted the thingy ma gig that holds the wheel on. Amazing what some cable ties can do.

We are starting to look like a grandma and grandpa heading out on our weekly food shopping excursions. Back to unpack the goodies and clean up inside the boat a bit. Our work is never done.

One thought on “Lock 31E to Slaithwaite (pronounced Slough-it)”